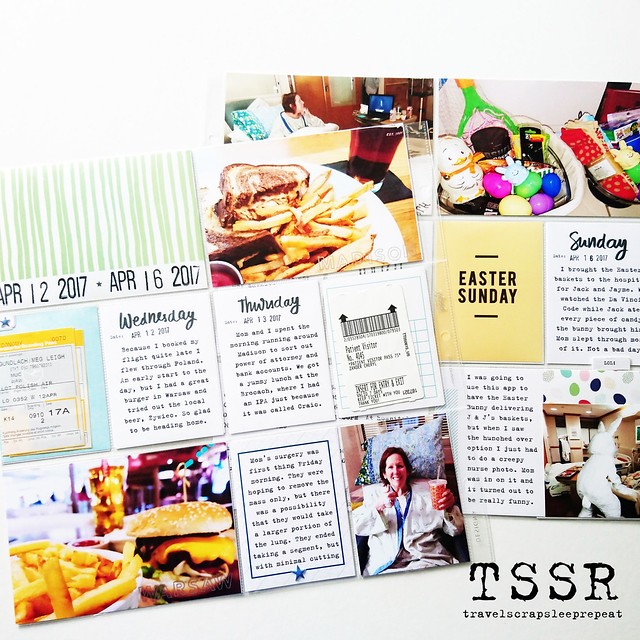 So, this spread carries on through my 2017 album following the zoo spread I shared during TSSR Relaunch Week 2017. I very rarely celebrate Easter in any notable way so I really wanted to make a point of using some of the adorable cards that Studio Calico released last year as an add on. 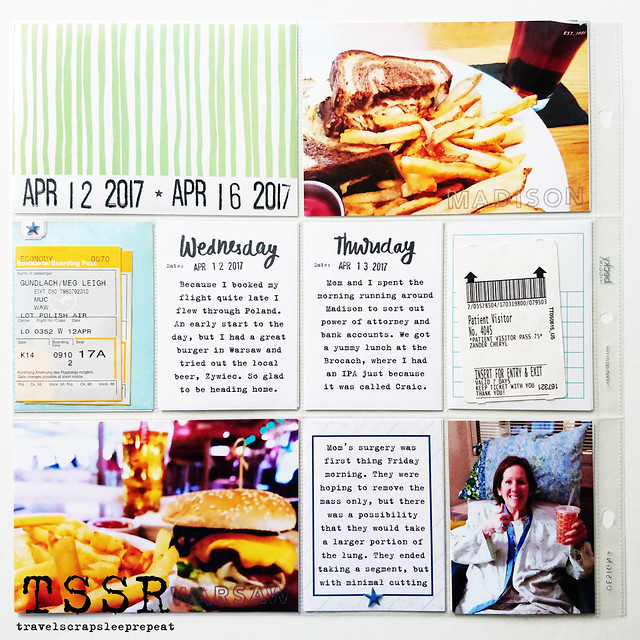 The left side of the spread is mostly about my flight back to Madison and prepping for mom’s surgery. Because I had relatively short notice I ended up flying through Poland, which was fine. They made a great hamburger. Mom’s surgery was on Friday, which felt like a massive event but was actually just a lot of sitting around. I had this cute picture of her we had sent out to show the family how great she was doing, so paired that with a 3×4 journaling card. And my parking pass….the parking pass was my friend. 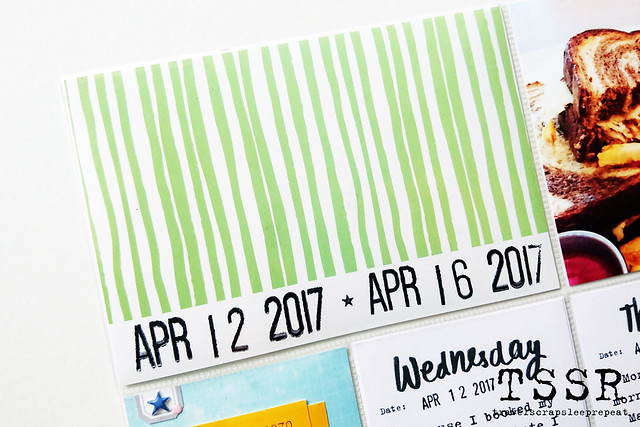 The layout starts on the Wednesday that I flew to back to the states and runs through that Sunday, which was Easter. I  use the Monday–Sunday week as a very loose guideline and frequently adjust my dates to better suit my story. 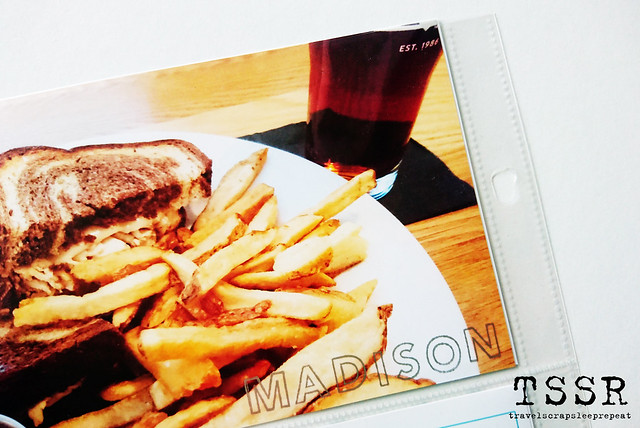 The two prominent photos on this side of the layout were both food pictures, but in very different locals (Warsaw and Madison). I thought that a good way to easily visualize that would be to stamp out the city name straight onto the photo. For funsies I used an older platinum ink that I had, which turned out awesome—in real life the letters are super subtle, but at certain angles the light catches it and it is quite bold like the photo above. 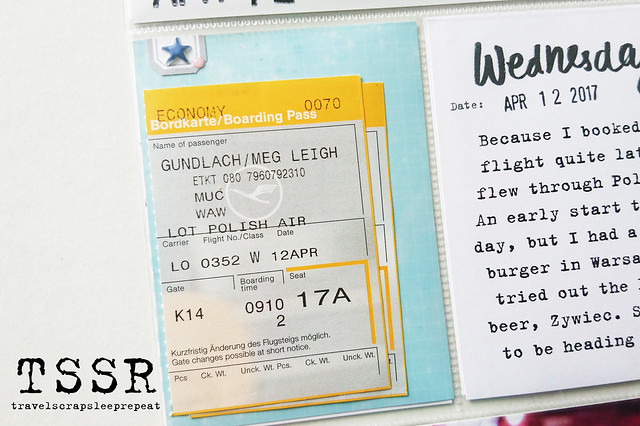 I wasn’t quite sure what I wanted to do to spice up the solid blue card, but I had this little label end left over from another card and I decided to just use it here with a couple tiny stickers. I always keep these little off cuts of labels to add like this and when possible I use them right away so I don’t lose them. 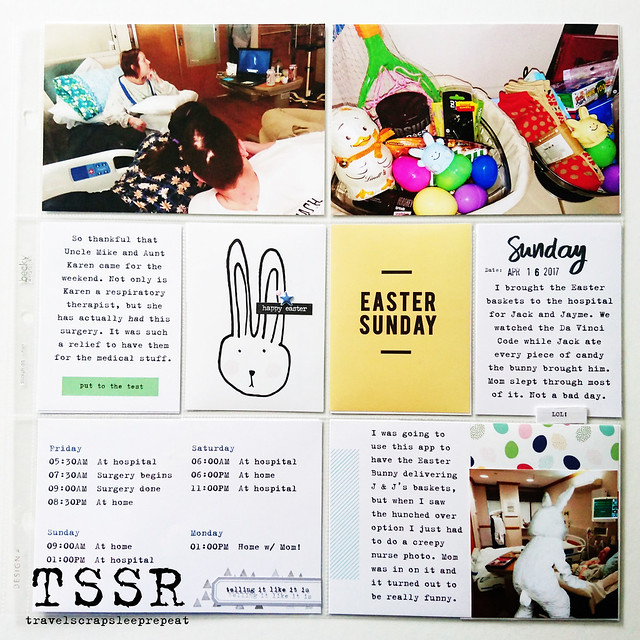 The right side is almost entirely dedicated to Easter, mostly because I really wanted to fit in those cute filler cards. 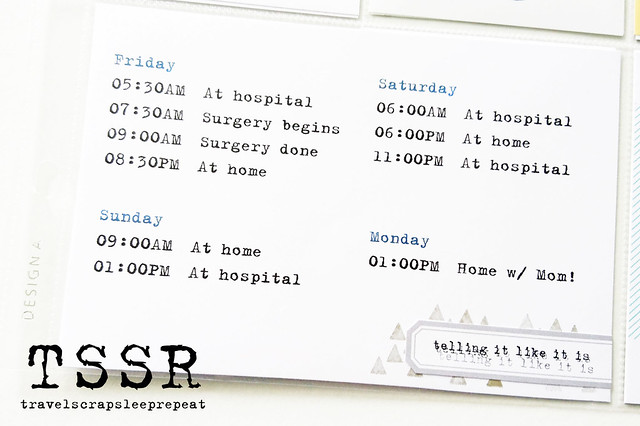 My aunt and I alternated staying at the hospital with mom through the weekend that she was there, which ended up being kind of a crazy routine. Luckily my jetleg made my schedule crazy anyway, so I just slept when I could for as long as I could. It worked.

The easiest way to illustrate this was to just type up the schedule. I had quite a lot of white space at the bottom and I thought it would be fun to use a cluster of triangles stamp to make a base for the label. I am loving the platinum colored ink, which as you can see here ranges from silver to gold depending on how it catches the light. 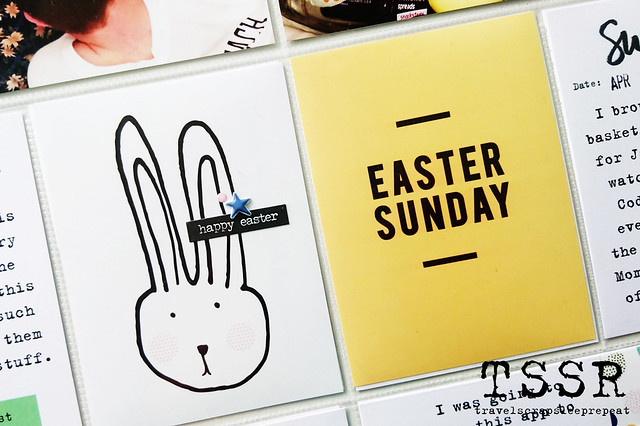 That bunny freaking kills me and I knew I had to use it. I pulled the colors for the layout from the easter egg card also in this set (see below), but since I am not much of a pastel girl I used a lot of the blues and greens and yellows. I even went with these dark blue puffy stars and added tiny pink enamel dot accents to allow a little spring in. 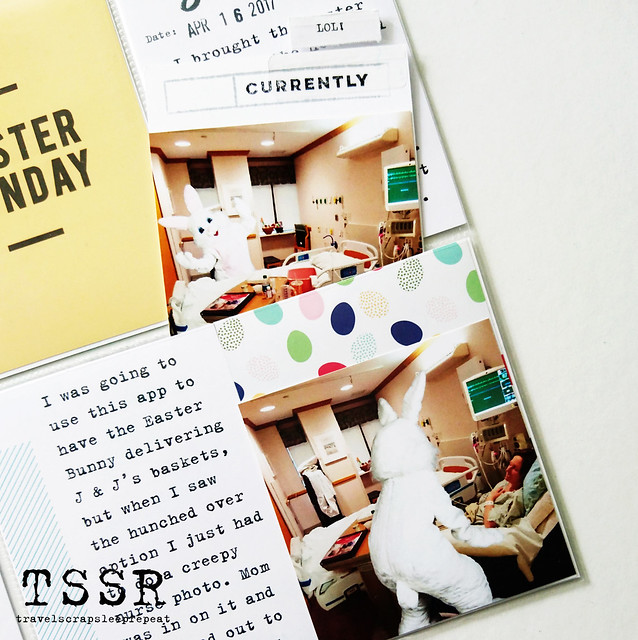 I had downloaded an app (Characters) to “catch” the Easter Bunny in the act of dropping off the baskets at the hospital. However, when I saw this hunched over option I had to do one of him “checking” on mom. She is only pretending to be asleep and was totally in on it. I still wanted to include the other one, so I put a tab on the top of the 3×4 card and tucked it behind.

Cards: Since I really wanted to use the SC 2016 Easter cards, I started with those (including the title card). I also pulled a couple from the April 2017  (Written in the Stars) to add a little consistency from one page to the next. My obsession with the LDM day freebies is obviously still going strong and the remaining cards are from the PL Fresh and PL September Skies editions.

Stamps:  Elle’s Studio Date It and generic roller date stamp. The tiny star on the title card and the “Currently” box on the bunny photo are from older Studio Calico PL kits (but I got them at goodwill!). The cities are stamped with the Clearly Kelly Outline Alpha and everything else is from the Citrus Twist grab bag.

Other: Label freebies by Kaitlin Sheaffer and tiny word sticker by Tim Holtz. The puffy stars are actually just no brand ones from a local stationary store (I like the keep an eye out for fun generic shapes) and the enamel dots I bought at Wilko a few years ago.

This was a rough week overall, but it worked out in the end and I am very happy with how the documentation turned out. I have two more pages to share that were skipped in TSSR Relaunch Week 2017 and then I will probably share new layouts in chronological order. Or as I am inspired to finish them. We will see. Have a scrappy weekend!